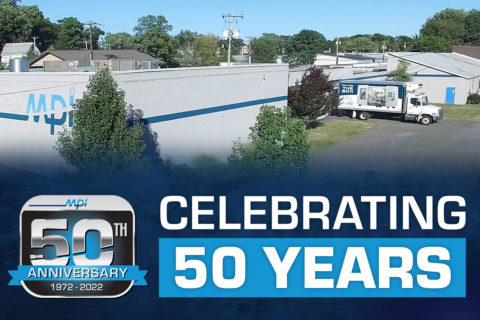 MPI, the worldwide leader in wax-room and ceramic core injection, assembly, and automation equipment has reached a major milestone in its history by celebrating its 50th anniversary.

MPI, and its founder Bruce Phipps, are recognizable to virtually everyone who has been involved in the investment casting industry for any length of time. Bruce’s tireless commitment, leadership, and contributions to both MPI and the investment casting industry are why he was inducted into the Investment Casting Institute Hall of Honor in 2016. It is also why MPI has remained the industry leader for 50 years.

Bruce started MPI with his partner and a single employee in 1972. Now MPI boasts over ninety employees including a team of world-class mechanical, process and automation engineers, machine builders, sales, and support staff, as well as a global customer support team. Its state-of-the-art, 47,500-square-foot manufacturing facility is home to a fully functioning technology center, showroom, training center and production facility.

Through Bruce’s leadership, MPI has been relentless at innovating new products and services. It has introduced a multitude of wax-room innovations over the years including the first programmable wax flow system, state-of-the-art process controls known as Smart Controls™, a unique multi-zone high- throughput, wax-melting technology, and the flexible nozzle injection, to name a few.

Today, MPI champions the automation movement in the wax room. While many believe automation to be in its infancy, MPI developed its first protype in the early 2000s and installed the first production automated pattern assembly system (APAS) in 2004. This early adoption of automation is why MPI is leaps and bounds ahead of its competition in terms of experience, innovation, and implementation. To date, MPI has secured seven wax-room automation patents.

Currently, MPI has many fully integrated automated injection and assembly cells installed for customers all over the world covering a wide range of applications in the automotive, medical, and aerospace industries. MPI engineers also developed an automated dual turbo wheel wax injector. This fully automated, two-station, injection machine has advanced robotic injection and part handling, creating the lowest cost solution for injected turbo wheels on the market. Recently, MPI introduced the first three-robot assembly which allows customers to produce larger and more complex assemblies than could previously be done. All this demonstrates that MPI continues to set a high bar with the level of sophistication and ingenuity it brings to solving wax-room problems with automation.

This milestone 50th anniversary pays tribute to the fact that MPI has been installing and servicing machines in the field for 50 years. Machines built so well they continue to perform all these years later. As a result, MPI has introduced a new refurbishment program that was created to remanufacture legacy MPI equipment and other brand injectors so that the machine can perform as well or better than the way it did when it was first purchased. This can extend the life and value of MPI equipment for a fraction of the cost of a new machine and turn an underperforming or nonfunctioning machine back into a revenue generator. This forward-thinking approach provides foundries with a cost-effective option to continue taking full advantage of their MPI equipment.

MPI’s longevity can also be attributed to its commitment to the industry and giving back. MPI donated a brand new twenty-five-ton Smart Control wax injector with a value of $160,000 to Pittsburg State University in Kansas. The injector was installed in the metal casting lab at the Kansas Technology Center to become a permanent education and training resource for future industry professionals. Additionally, Bruce and other MPI executives give freely of their time by serving on industry-related boards and committees, teaching ICI certification and process control courses, and have presented and published numerous white papers in the US and abroad for all the major trade associations.

While MPI’s accomplishments in its first 50 years has been extraordinary, it is committed to revolutionizing the industry with its out-of-the box thinking and constant innovation. MPI never loses sight of the need to maintain its position as the leading manufacturer of traditional wax-room equipment, but always with a firm focus on the future.

MPI, Inc. is the worldwide leader in wax-room equipment and has been involved in the investment casting industry since 1972. As the acknowledged leader in wax-room innovations, MPI has developed and introduced more systems and products than all its competition combined.

MPI’s mission is simple – to be the most technically advanced supplier of wax-room equipment and to provide its customers with the highest return on investment measured by superior quality, throughput, innovation, and support.